At the first notes of “Alone in Kyoto” by Air, my gentle alarm music for so many years, I get out of bed. Except, it’s not morning. It’s the middle of the night. And everything moves. The strong swell of the day did not subside. I put on my tuque, polar, Goretex and personal flotation device while trying to keep my balance so as not to bump and wake Martin (who snoozes more than he sleeps at this stage of the trip). I then join Alexandre in the cockpit for a brief report in the low red lighting of our headlamp (to preserve our night vision) on the wind, the sails and the traffic. As soon as he goes down to his cabin for a well-deserved rest, I go out for a first round. The air is chilly and the wind constant. A multitude of stars twinkle as a huge red moon appears and disappears on the horizon in sync with the crests and troughs of the swell. I am alone at the helm. In the middle of the Atlantic. At night. For the first time in my life.

It’s both intimidating and exhilarating to find yourself, through a series of improbable detours of fate, in the midst of one of your greatest youthful dreams. I have always said that we must be as cautious with the posters that we put on our walls during our teenage years as we should be with the books that we read in this influential period. For the books, my father was careful to strategically sprinkle books around the house such as “The Long Road”, “Solo or Not” and “The Bests of Sailing” as he had also done with “Annapurna”, “Night Flight”, “ Southern Mail ”, ” Survival Guide for the Forest” and so many other books that have shaped my dreams and my path. My mother who has always supported us in our crazy adventures (“Be happy!”), also told us when she welcomed us back with a dinner sprinkled with some celebratory bubbles that every night she addressed the picture of our father on her bedside table to ask him to protect us. “It’s your fault if our two children are together on a sailboat in the middle of the Atlantic!” she whispered to him with as much tenderness as exasperation.

After a few hours on board, our sea legs kick in, as predicted by Jean-Luc, our wise and very experienced captain. No more discomfort and nausea. It’s such a sudden change that it has something magical about it. During this first day filled with the excitement of the departure (and jet lag leftovers), we dropped the lines in the Azores, hoisted sails, lost sight of land and… the three of us, Alexandre, Isabelle and Martin, in order, ended up perfectly out of commission, lying on our backs in the cockpit, shooting disgusted looks at each other intertwined with shame and misunderstanding. We, pilots, mountaineers, adventurers and future sailors were knocked out while our two French friends were in perfect shape. During this lethargic afternoon, while cursing the swell, I even wondered about the strategy that Martin should adopt to resell our boat when we arrived in La Rochelle!

Here I am back in the office in front of my computer screens for a last professional sprint in the middle of intense preparations for our grand departure. The details of the long hours of this ocean passage are now entangled, confused and already slipping from memory. The flamboyant sunsets, the golden aurora and the starry skies all merge with each other in the delicious flow of time. Some vivid recollections, however, mark this vague amalgam of memories. What remains is this troop of dolphins playing on our bows while Alexandre and I are alone on the trampoline, admiring the sun rising on a calm sea. What remains is the whale sightings, one of which showed us its majestic tail a few metres from the boat before plunging to the depths and others waking us with the sound of their spouts projected in the air just in front of our cabin’s porthole as we were taking a nap. What remains is the exhausted and trembling little swallow who has come to spend her last moments of life with us. What remains is the crew’s sweet comradeship with Willy and his big heart in its centre. What remains is all this knowledge and experience generously shared by Jean-Luc. What remains is this deep intimacy at the red glow of our headlamps when I took over from Alexandre (my mutant brother who knows no limit) to be then relayed by Martin (“mon chéri”). What remains is this first night shift under the stars. What remains is the feeling of having been exactly where I was destined to be in the midst of sensations and emotions that only nature and elements can provide. What remains is my deep desire to continue my exploration of life in the company of my crewmate and accomplice aboard this boat under construction which will also become our home. What remains is an eager excitement at the prospect of finally initiating this extended meandering stroll aboard Oxalis Borealis. 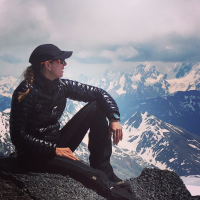 Absolutely fantastic ! Congrats Martin …and Isabelle that we wish Rafaela and I to meet. What you are doing is our objective in 7 years!! We are based in Rio and we love to sail (with a skipper for now). You decision is amazingly inspiring, thank you ! Ghis and Rafa

Thanks Ghislain. I hope our paths cross again.